Fully electric BMW SUV due in 2021 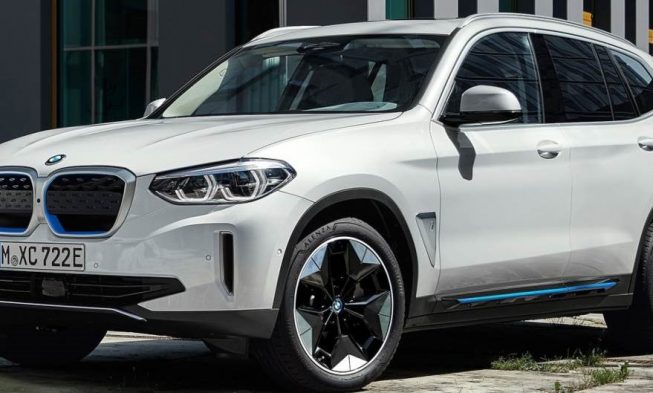 BMW unveils iX3 electric SUV destined for China, Europe and Australia; it will have up to 460 km of range.

The first electric BMW SUV for the 2021 model year, the new BMW iX3, is almost the same concept that the German carmaker previewed at the 2018 Beijing Motor Show.

The brand new iX3 is a kind of electric version of the current X3, and even shares size, platform and various mechanical and technological elements with this model.

iX3 electric SUV will be built in Shenyang, China, but currently there is no intention to go to the US and Canada markets.

According to the details mentioned by the Bavarian brand, power is provided by a single electric motor that motivates the rear wheels. The generated horsepower amounts to 282, enough to accelerate the electric BMW SUV from 0 to 62 mph (100 km/h) in as less as 6.8 seconds. Its 80-kWh battery pack allows travel up to 286 miles (460 km) on a full charge, and recharging from a 0 to 80 percent capacity only takes 34 minutes, provided a 150-kW DC fast charger is used. The iX3’s charging unit, which sends power to both the 400V battery and the 12V on-board power supply, is another new fifth-generation eDrive technical feature.

An interesting novelty is the incorporation of a sound system when turning on and starting the car to warn pedestrians and cyclists of its presence in urban environments and which has been co-developed composer Hans Zimmer. This system, called BMW Iconic Sounds Electric, will be incorporated and upgraded to other BMW electric models.

BMW, a latecomer to the show

Experts say that the German car maker ignored electric vehicles for a couple of years, save for the new Mini EV, and now has been trying to catch up on a market dominated by Tesla.